Born and raised in the UK, Mark Burgess dreamt of becoming an astronaut until, at the age of 10, he realised that the UK doesn’t have a manned space program so his dream shifted to a career in aerospace. 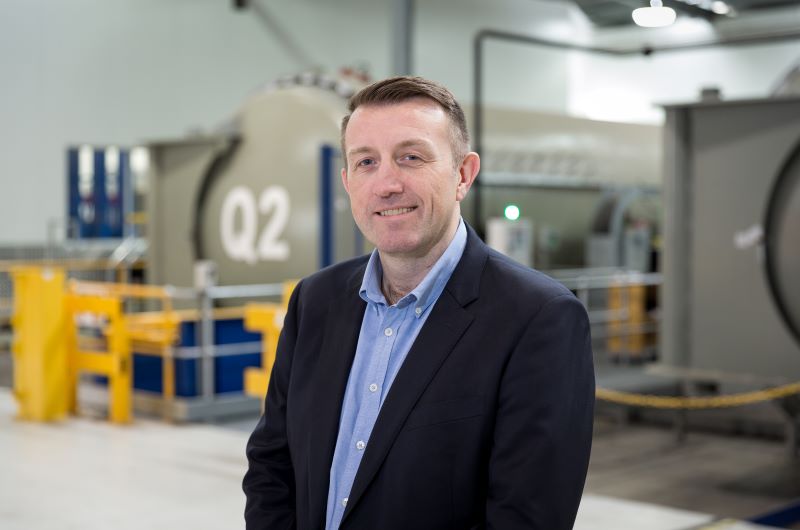 Mr Burgess began his studies with a very specific goal of working with BAE Systems and upon completion he did just that, securing a successful career in his dream job.

“I was always drawn to industries that designed, developed, built and sold things and obviously aerospace, particularly in the north-west of England was a really big employer,” Mr Burgess recalls.

Following a 16-year career with BAE, he was able to progress through a variety of roles in a number of countries, including a significant career with Honeywell International.

“I lived in France for a year, I lived in the States for the better part of a year, then I moved to the Middle East for two years and then Asia for five,” Mr Burgess says.

Following his worldly expeditions, he eventually relocated to Australia, having married an Aussie he met in the UK.

“We self-relocated and I continued working for Honeywell for another two years or so, until the search and selection firm called me about this particular role,” Mr Burgess adds.

“I’ve been out of the UK for 10 years, but in Australia for just come up to five.”

Currently, Mr Burgess is employed as the CEO and managing director of Quickstep, a company seeking to drive a new era in the aerospace industry within Australia’s economy.

Originally founded in 2001 as a technology start-up, it began to win some significant manufacturing contracts around 2010, which precipitated its move from Western Australia to Bankstown in Western Sydney.

Over that period, Quickstep has grown from a technology company to a manufacturing-orientated business with a significant R&D capability.

“We build products from carbon fibre and invest in process technology for the manufacture of carbon fibre components. We’ve done work in the auto sector, medical devices and rail, but the vast majority of our business now and into the future is in the aerospace environment,” Mr Burgess explains.

“Currently, very heavily dominated by defence aerospace applications, we make a lot of parts for military aircraft produced in the US, but the manufacturing process technology we have is very heavily geared toward launching into the commercial aerospace market.”

Speaking about the Australian defence aerospace industry, Mr Burgess admits it is very challenging due to its limited size.

“However, in terms of engineering competency it’s as good as anywhere else I have worked in the world.”

Having rubbed shoulders with some of the best in the business, Mr Burgess clarifies that Australian engineers are remarkable, but they’re let down by an introvert environment geared mostly towards the resources sector and agribusiness.

“There is a genuine challenge of geographic distance, as well as the fact that Australia doesn’t have a great reputation. In fact, it doesn’t have any kind of reputation for manufacturing or aerospace particularly,” Mr Burgess says.

“I frequently have to start by saying ‘No, really, we do do these things in Australia’, including in Australia sometimes.

“There is a lack of knowledge and investment in advanced manufacturing. We’re listed and we speak to a very small sector of the investment community, because if you’re not in resources, or agribusiness or possibly fintech or biotech, there is not a lot of interest out there.”

“There are some really good examples of successful advanced manufacturing in Australia and we need to do more to promote and amplify that, to demonstrate what Australia is capable of,” he says.

Mr Burgess admits that the government has done a lot of work to boost capabilities, but he believes a more coherent approach is needed to advance research and development.

“A very robust policy framework has been put in place over the last few years, which is helping,” he says.

“But there is more that needs to be done, particularly in terms of how you put foreign suppliers in contractually binding obligations rather than relying on the kindness of strangers.”

“Australia is an incredibly well educated and capable economic block. But we’re quite parochial and inward looking and we need not to be. We exist in a global market, and actually if we put our minds to it, we can compete with anybody,” he adds.

“But we too rarely see that belief system in existence here.”

A year of breakthroughs

Looking forward, Mr Burgess predicts that great things are on the cards for Quickstep.

“After 17 years in existence, we have seen our first ever net profit, which is outstanding,” he reveals.

“The current financial year we’re in at the moment, I expect to see continued top-line growth, really substantial improvement in the EBITDA and particularly the net profit, which will build an ever-stronger base for us to continue to grow, as well as the announcement of a couple of significant contracts.”

As for his personal life, Mr Burgess admits weekends will continue to be dedicated to his two kids and sports.

“I spend a lot of time with my kids, they’re 10 and seven. We spend all weekend watching them play sports,” he says.

“We also go watch a little bit of the NRL, obviously it’s summer now, so we’ll be spending a lot of time watching the kids play cricket, as well as going to some of the Test matches and the Big Bash.”