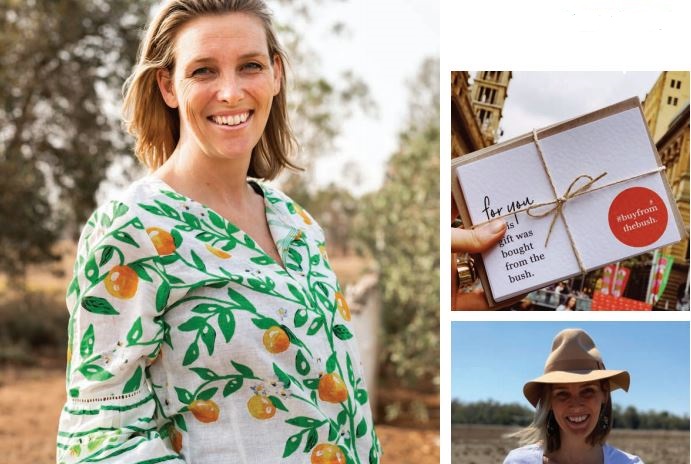 Grace Brennan was born and bred in Sydney. But, at the age of 26 she fell in love with a farmer and decided to uproot her life and relocate to Warren in western NSW.

“I grew up in Sydney but fell in love with a farmer so moved to live on a sheep and cropping farm in western NSW when I was about 26,” Ms Brennan tells Public Accountant.

“I have been able to absorb all the wonderful things that the bush has to offer and am inspired to share that with people in the city.”

With a background in community development, she co-founded an online employment platform for agriculture, AgDraft, which ultimately led to the birth of Buy From The Bush.

"I have watched my husband work through this drought feeling very helpless. No words or consoling cuddles can detract from the relentless stress and fatigue caused by drought.

“My prayers have not made it rain. And yet, I desperately wanted to create a solution to this enormous problem of drought"

After a friend told her that her family were 'buying from the bush' for their Kris Kringle, the seed was planted.

Grace took to her computer and created an Instagram page to showcase the beautiful boutiques and wares available to buy from rural communities facing drought.

“I created it one morning at my kitchen bench after being frustrated with an interview on the radio covering drought. I had been watching my local community suffer through drought for a few years and felt compelled to take action.

“Though it was, in some ways, a spur of the moment decision which led to a project that I have largely run on the fly, I would say I have been developing key skills and laying the groundwork for this for most of my working life.”

Speaking to the Public Accountant, Grace explains that while we mainly think only of the farmers when we hear the word drought, some of the earliest casualties are in fact small businesses.

That’s where Buy From the Bush steps in.

Created to broadcast this rich pool of talent and ingenuity to city consumers, the campaign has resonated with shoppers Australia wide.

“There is an incredible offering of creativity, productivity and innovation in bush businesses. From beautiful boutiques with curated collections of fashion and homewares to farmers diversifying in to creative trades and many talented women running side hustles to generate alternative income streams,” Grace says.

“Social media has offered these businesses a direct line to their city kin and given them a useful ‘work around’ for those without the resources to run online stores.”

While city shoppers have embraced the campaign with open arms, rural businesses are flourishing with many reporting a drastically increased social media following.

To quote one business owner: "I think when I look back on this drought, the one thing I'll remember is the warm and fuzzy feelings this campaign has created”.

To quote another: "I also just wanted to say thank you and tell you how buy from the bush has made a difference to me. Yesterday I processed 66 online sales. Normally I wouldn’t make 66 online sales in a year. I sold $2000 worth of greeting cards in a day! And although I’m exhausted, I’m over the moon.”

But Grace is not the only gear grinder behind this initiative. She is joined by Millie Fisher and Georgie Robertson, both working hard from their kitchen tables.

Millie tells us how Buy From the Bush came to life on a dry, windless day in her backyard. It was 16 October and Grace was late to lunch at Millie’s house.

“Grace said she was late because she’d been drafting a letter, but she wasn’t sure who it was for. She’d listened to an interview that morning with the Prime Minister and really felt that they were missing something critical. She said she felt so helpless and wanted to do something; that she had an idea but needed some help.”

The pair were joined by PR guru Georgie within the first few weeks.

“I got in touch with Grace who was already getting a huge amount of inquiry and at the end of the phone call I offered to help out,” Georgie says. “From there, it snow-balled.”

Today, the Buy From The Bush campaign has over 222,000 followers on Instagram and has been helping both drought and bushfire affected small businesses survive beyond immediate challenges.

Speaking to Aussies at the Australia Day Address, where she was being honored for her achievements, Grace said “Country towns have been built on what I would call a foundation of 'doers'.

“On any given day, an Australian farmer is an amateur scientist, vet, builder or mechanic...Our local bus driver, a mother of three, is also an aged care worker and fire fighter.

“Farmer's wives might feed their stock or do an irrigation run in the morning and then go to work as teachers, fashion designers, agronomists, researchers, online business owners or lawyers… We are a country of people who want to help each other. What a triumph that is.”