The ANZ-Roy Morgan Consumer Confidence rose for the third consecutive week while business confidence fell for the third straight month for the first time since August 2021 during the NSW and Victorian lockdowns. 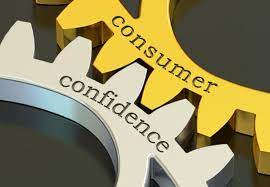 Consumers were feeling more confident although there were early signs of a drop in the index in all states except Queensland and South Australia.

This week’s increase was put down due to more positive views on personal finances and the Australian economy’s performance over the next year.

Looking forward, fewer than a third of Australians, 32 per cent (up 2ppts), expect their family to be “better off” financially this time next year compared to 32 per cent (down 3ppts), who expect to be “worse off”.

However, only 7 per cent (up 1ppt) of Australians expect “good times” for the Australian economy over the next 12 months compared to 39 per cent (unchanged), who expect “bad times”.

In the longer term, just 12 per cent (up 1ppt) of Australians are expecting “good times” for the economy over the next five years compared to 18 per cent (down 2ppts) expecting “bad times”.

“The sharp fall in petrol prices over the past three weeks may have been more important for sentiment,” he said.

“The drop likely explains why household inflation expectations fell 0.5ppt to 5.5 per cent. The only confidence subindex that decreased was ‘good time to buy a major household item’ – ongoing weakness in the housing market and pressure on household budgets being likely reasons. Despite the gain in the past three weeks, sentiment remains at a very low level and vulnerable to more tightening from the RBA.”

Meanwhile, the Business Confidence Index was 94.9 (down 2.4pts since May) and with the rise in the cash rate again on Tuesday (2 August) to 1.85 per cent, that is expected to drop again.

Australia’s interest rates (1.85 per cent) are now the highest they have been for over six years since May 2016 (2 per cent).

Property & business services, community services and education & training are the most confident industries in the last two months.

These two industries are among nine with business confidence higher than the neutral level of 100 in June–July 2022 although all 18 industries measured had a lower rating now compared to a year ago.

The weakness in business confidence clearly related closely to the high inflation and increasing interest rates the Australian economy is currently dealing with. The recent ABS CPI figure for the year to June 2022 was reported at 6.1 per cent – the highest annual rate for over 20 years since 2001.

The low reading for the retail industry showed as inflation and interest rates rise customers will firstly cut back on their discretionary expenditure while non-discretionary expenditure on essentials such as food and drinks continues. The latest ABS Retail Sales figures just released for the month of June showed that although the annual rate of growth was high at 12 per cent, the month-on-month increase was only 0.2 per cent.