Many Australians blame our variable climate for the recent severe bushfires and crippling drought, but researchers say these ‘natural’ disasters are not natural at all. 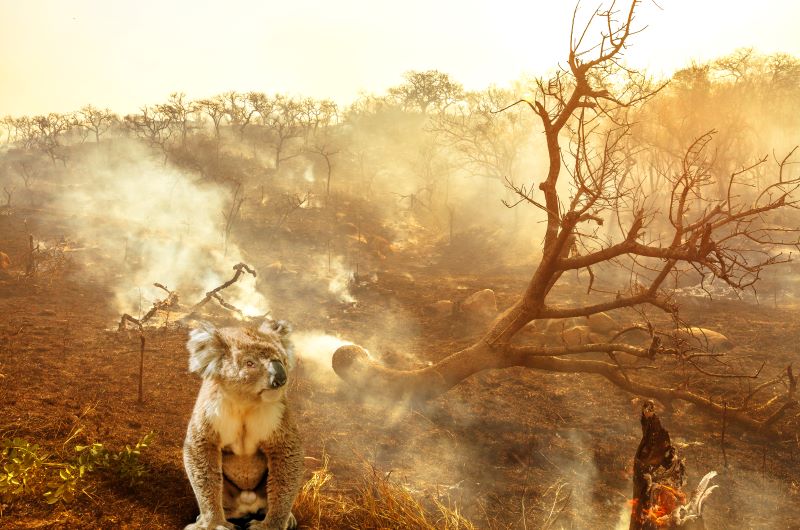 Australia has endured a horror bushfire season, made worse by a severe drought in the eastern states, and many Australians are lamenting the cruel and fickle hand of nature.

A year ago, a disaster of another kind was unfolding at the Menindee Lakes and the Darling River in southwestern NSW. Millions of fish died over the summer, when low oxygen in drying pools suffocated the fish.

In January 2020, these two disasters merged, with hundreds of thousands of fish dying in the Macleay River in northern NSW following an influx of bushfire ash that stripped the water of its oxygen.

And worse is to come with reports of algal blooms developing in many parts of the Murray Darling Basin, which are likely to lead to further mass fish kills.

Many commentators and politicians lay the blame for these disasters firmly with Australia’s variable climate.

“It’s a kind of common, I don’t know how deliberate, tactic of politicians to blame nature as a way of shifting responsibility away from themselves,” says Professor Lesley Head from the School of Geography at the University of Melbourne.

But many researchers are pushing back against this narrative, citing the contribution of human-induced climate change to both drought and fire, and looking beyond that, to the complex social, political and economic factors that lead to ‘natural’ disasters.

“With our landscape, which is characterised by high climatic variability, it becomes easier to call on certain cultural themes like Mackellar’s poetry (‘a land … of droughts and flooding rains’) or simplistic statements (‘we’ve always had drought, we’ve always had bushfires’), without appreciating the fundamental shifts in the processes that are exacerbating the severity and frequency of extreme events,” says Professor Sue Jackson, a geographer from the Australian Rivers Institute at Griffith University.

The Menindee fish deaths did, indeed, occur during a severe drought, but a report commissioned by the Australian Academy of Science (AAS) into this disaster concluded that the primary cause of the fish kills had a human cause: “excessive upstream diversion of water for irrigation”.

Our historical relationship with water

Professors Head and Jackson were two of the authors on the AAS study, and they subsequently delved deeper into the history of the Darling River and have published a new open-access paper in the journal Geoforum describing how the river has been managed since European settlers arrived in the 19th century and the ‘hydrosocial’ changes that have led to where we are today.

“It’s very easy when there’s not much water in the river channel to say, ‘it’s all because of drought’,” says Professor Head.

“On top of the drought, there are many other things that have contributed to that lack of water.

“And in the same way, with the bushfires no one is denying that there are natural processes involved, but there are also processes that have got social, economic and political drivers within them, over both the long and short term.

Professor Jackson says the frequency and duration of these events are also having an impact.

“An example could be the shorter window now available for controlled burning, or the very strong effect of water extraction upstream. Records do show that the Darling previously experienced dry periods, but these were not as frequent and did not last as long as they have recently,” she says.

“The uneven effects of these socio-natural processes, which in the case of the lower Darling exacerbated the socio-economic vulnerability of the region, are of particular interest to us as geographers.”

The researchers identified four historical periods that have transformed the Lower Darling River from the revered ‘mother’ of the Indigenous Barkandji people, to little more than a number (in gigalitres) on a spreadsheet used to balance supply across the whole of the Murray Darling Basin, Australia’s largest river system.

“What our politicians are saying today didn’t come out of nowhere, these ideas didn’t just appear. In fact, you can find threads of this in the late 19th century. Ideas of the river as a resource to facilitate agricultural development have underpinned Australian nation-building,” says Professor Head.

In the second half of the 19th century, the river first started being managed for navigable flows, so that wool and other commodities could be easily transported to the coast and the goldfields of Victoria.

Then, over the 20th century, the extraction of water for irrigation took priority, with an ongoing battle between the states of NSW, Victoria and South Australia, to capture and carve up the flows of the Murray-Darling system.

Intense water resource development (like dams, diversions, weirs) stimulated agricultural expansion in NSW and Victoria and included the massive expansion of storage in Menindee Lakes, which used to flood and dry naturally.

Water stored at Menindee was seen as ‘exchange water’ that would allow for the continuous extraction of water from the Darling to guarantee South Australian supplies.

The arrangement protected the economic interests of the Murray and Murrumbidgee irrigation districts by allowing them to expand.

“We’ve been driven by a concern for water as a quantity, and often for its quality, but not for the varied relationships that people have with water,” says Professor Jackson.

“For the lower Darling it’s been the concern of governments and economic interests to move water out of that area because it can be more profitably used in other places.”

Since the turn of the century, widespread acknowledgement of excessive water extraction prompted the government to put a price on water and set up a framework to ensure environmental flows.

This was done while maximising extractive use through a series of water saving measures like purchasing water entitlements, engineering works and reducing ‘evaporative loss’.

The latter of these was the reason for a large drawdown of the water at Menindee, which contributed to the fish kill of 2019.

The river as ‘mother’

And through all this time, governments have largely ignored the voices of the local Indigenous peoples.

The Barkandji people’s native title stretches over 400 kilometres of the Baaka (which was only named the Darling River by explorer Charles Sturt in 1829), including the Menindee Lakes.

“The perspective that we’ve heard from Barkandji and other groups is much more conscious of the need to revere water’s life-giving qualities within the places in which those communities are bound and the importance of fulfilling responsibilities to caring for the country,” says Professor Jackson.

There has recently been some recognition of the Indigenous connection to the river, with growing support to rename the Darling River to the Baaka-Darling. Barkandji traditional owners intend to create a ‘Baaka Commission’ to oversee the river.

Professor Head laments that in January last year, when the fish kills became a big story, Indigenous and other communities in the region had long-before run out of water and had been drinking donated bottled water for months.

“But that wasn’t enough to set off this outcry. It needed dead fish and white men crying.”

This article was first published on Pursuit